Generally speaking, employment and economic assets are widely dispersed throughout the city and not well connected. The scattered assets are largely due to the lack of appropriate master plans to guide/attract employment growth to guide adequate land use controls and industry and geographic-specific incentives. Reflective of the nature of the major economic drivers present in San Antonio, these challenges have meant the City can’t fully leverage these assets to create clustered businesses and spin-offs in similar industries.

However, a detailed analysis of job density also shows that jobs have somewhat organically concentrated into nine existing and four emerging regional centers along major transportation routes (see Regional Centers by Status on next page). About 50% of all jobs in San Antonio are within those 13 regional economic centers, which have captured over half of all non-residential development since 2000.

Looking holistically at this polycentric pattern of regional centers can fundamentally change the way San Antonio envisions land use, urban form, transportation and community in the future. By developing strategic growth plans that align economic development with land use planning, public transit and infrastructure investment, these 13 regional centers can offer a wide variety of opportunities for employment-oriented uses, sites, infrastructure and amenities. Clustering similar industries within these centers will create formal and informal interactions between businesses, spurring additional economic activity.

Downtown has been, and should continue to be, a major economic focus because it anchors the multi-billion dollar tourism industry, has great potential to attract innovative and creative industries whose workers seek vibrant urban environments, and makes cost-effective use of large infrastructure investments already in place in the city’s core. But other existing and emerging centers need similar levels of attention and investment to help them develop, promoting equity and access throughout the region.

As compatible development surrounding bases is identified and prescribed, San Antonio should work with the military to attract developers who specialize in creating affordable, community-focused housing. As with development in all parts of our city, access to transportation, green spaces, parks, trails, and proximate healthcare are all factors to consider.

Each center is different and its development will be directed by its existing uses (particularly those oriented to military, aviation or heavy industry). However, some of the centers are well positioned to develop as vibrant mixed-use places that offer a range of housing options and price ranges, allow higher-density and incorporate carefully designed and located amenities that will benefit both residents and employees of the center, as well as people in adjacent neighborhoods. These live-work-play environments attract development and businesses nationally, but are lacking in San Antonio.

The partnership of an active institution such as a university or an innovative large employer, working in concert with the City and other partners, can bring significant and rapid positive changes to areas that would otherwise remain vacant or underutilized for many years. We will also need to invest in and encourage greater multimodal and transit connections between all the centers, as well as other key corridors and activity areas.

Innovative, creative thinking about these regional centers and encouraging and supporting appropriate growth within them is a key strategy for preserving our existing lower-density, single-family neighborhoods so they retain their character in the face of significant expected population and job growth. 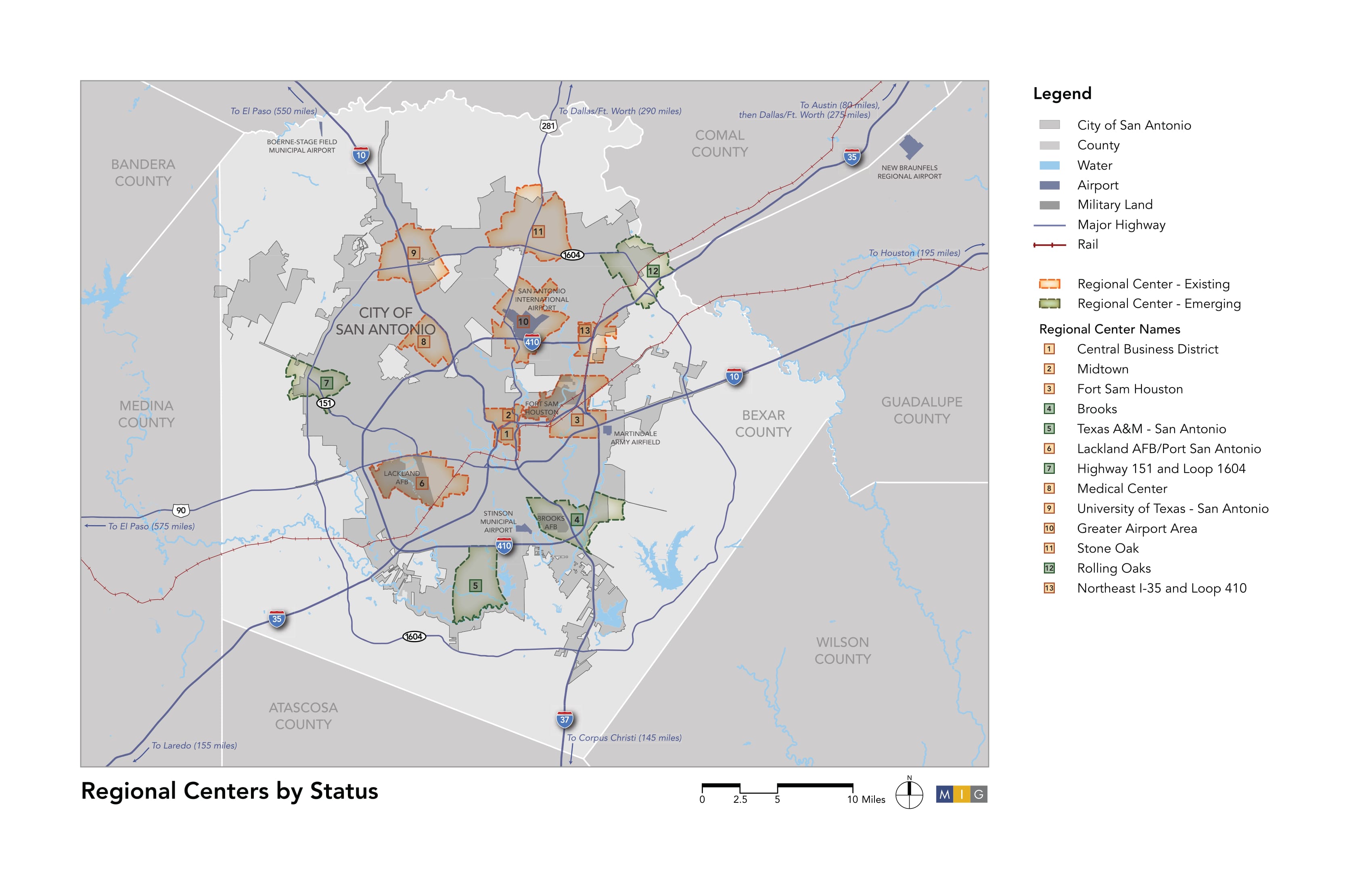